When GM and MJZ Productions needed an experienced, knowledgeable and reliable source of industrial robots to shoot its Superbowl XLI ad, it turned to Antenen Research. We have suppled robots for various Hollywood feature films, including Independence Day and Virus, as well as numerous TV commercials, including spots for the Oldsmobile Aurora, the Chevy Trailblazer, GE Plastics, Mercedes, UPS and GMC. 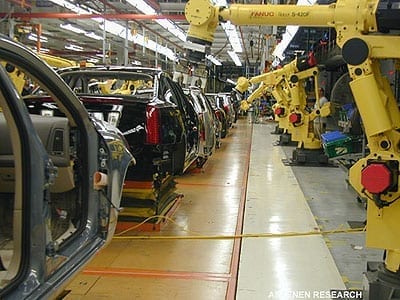 We shot the GM commercial on a Saturday just before Christmas. In a short period of just 18 hours between 5 AM and 11 PM, we installed all the robots on a working assembly line, interconnected them, programmed them, operated them during filming, tore them down, and loaded them out.

"For football fans, the drama will be over the second the clock runs out on Super Bowl XLI. But for General Motors Corp. (GM ), the moment of truth will come the following day. That's when consumers and the media will weigh in on the latest crop of Super Bowl ads, among them GM's spot about an anthropomorphic robot. This isn't just a one-off spot: GM wants the robot to star in its ongoing effort to convince drivers it's as obsessed about quality as Toyota Motor Corp. (TM ) If the $5.2 million ad fizzles, it's back to the storyboard." ¹

What projects can we help you with where excellence planning and execution are absolutely essential? We have lots of experience turning visions into reality. Just ask GM, a Superbowl XLI winner.

Click here to read the Business Week article about the ad.

Contact us to discuss your next automation project or to request a quote.